Standing in the frozen food aisle of your local grocery store, you’re faced with an all too important decision: Chunky Monkey or Cherry Garcia?

As enticing as a pint of your favorite flavor can be, there may be a more subtle factor at work in the form of a light emitting diode.

A study completed by the Lighting Research Center compared  300 shoppers’ preferences for LED lit freezer cases to a matching case lit by fluorescent technology. In the first part of the study, both cases were kept at similar light levels. In the second part, the average light level in the LED case was dimmed.

The overwhelming preference for LEDs shouldn’t shock you, at least, when you can compare the two technologies side by side. 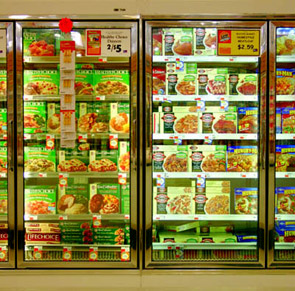 Can you spot the savings?

LEDs are champions of uniformity and sparkle. Even though both cases at the first part of the study were at similar light levels (the fluorescent was slightly higher actually), shoppers felt that the LED case seemed brighter than the fluorescent because of the unevenly lit spots left by the fluorescents. Looking at the picture above, can you blame them?

And energy savings is just the beginning–you’ll save on maintenance too. The “solid state” of LEDs make them far less likely to shatter when bumped by maintenance crews or employees. Unfortunately for the fluorescent lamps, this is a fairly common occurrence, especially when their cover guard is missing (which can happen more than you think).

Light output and efficiency aren’t the only factors in determining which lamp source is most suited to the freezer displays: lamp life is also crucial. LEDs last much longer in comparison, meaning less changing of lamps and more importantly, less of an owners time spent on finding replacements. Isn’t running a store time consuming enough?

LEDs are flexible in that they can be mounted in a variety of ways within the coolers, thus the interior shape of the freezers can be redesigned for more efficient cool air flow. This decreases the power needed to run the compressors or other cooling equipment.

Are LEDs the right fit for your store? Have questions about LED freezer display cases vs.  fluorescent? Shoot us an email at info@aetnalighting.com or comment below.